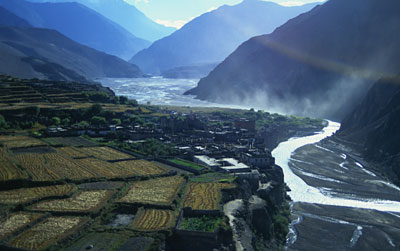 The three transboundary rivers where Chinese megadam building will have severe impact are the top three in the list following: the Tsangpo, Salween and Mekong. Until recently, the Tsangpo and the Salween were wild rivers.

The Yarlung Tsangpo runs through the heartland of Tibet from west to east. It is often referred to in its short form, the Tsangpo, and is also known as: Yarlung Zangbo Jiang (Chinese); Brahmaputra (Indian—but referring to the river within India); Jamuna (Bangladesh). ...more

The Last Wild River of Asia

The powerful Salween flows over 2,800 kilometres from source to sea. It rises in the Tangula Mountain region (Amdo, Tibetan plateau) and courses through Tibet, southwest China and Burma (shared with the Thai border), before finally emptying into the Andaman Sea. Through Tibet and Yunnan Province, the river carves a majestic 'grand canyon'—some 700 km in length. At certain points, the canyon is an astonishing 4,500 metres deep. The river is of little commercial value, which has proved to be a positive thing because its great beauty is preserved for much of its length—the last major freeflowing river of Asia. ...more

No river in Asia has generated as much controversy as the Mekong, which rises on the Tibetan plateau and courses through Tibet, China, Laos, Burma, Thailand, Cambodia and Vietnam. The Mekong is a lifeline for Southeast Asian nations as it supplies fish—a major staple in places like Cambodia and Vietnam. Severely disrupting fish migration and hatching is a string of mega-dams in southwest China. More huge dams are under way in Laos and Cambodia—a number of them being built and financed by China. ...more

Known as the drichu (Tibetan), chang jiang (Chinese), or jinsha jiang (Chinese for the upper Yangtse), the Yangtse rises in the Tanggula mountain range in Amdo at around 5000 metres, and flows for 6,300km to China's east coast near Shanghai. Except that these days, the river may fail to reach the sea. ...more

the river that fails to reach the sea

The Yellow River is known as Ma Chu in Tibetan, and Huang He in Chinese. The Yellow River basin is regarded as the cradle of northern Chinese civilizations and was the most prosperous region in early Chinese history. But also a source of devastating flooding which earned it another moniker: River of Sorrows. ...more

The Indus hit the news big-time in 2010 when flooding triggered the worst humanitarian crisis in Pakistan's history, killing many and displacing millions. ...more

major feeders for the Yangtse

The Yalong River is known in Tibetan as Nyagchu, and in Chinese as Yalong Jiang. It is the largest tributary feeding the Yangtse. It is sourced in Amdo (Qinghai), on the Tibetan plateau, and flows over 1300 km through Sichuan to its confluence with the Yangtse in northern Yunnan Province. Along the way, the Yalong passes through ethnic-Tibetan regions. ...more

The Irrawaddy River is sourced in disputed territory on the Burma-Tibet border. It is the largest river in Burma, and is fed by a number of tributaries. It's not clear whether the source of the Irrawaddy lies in Tibet or on the Burmese side, but in any case, a major feeder called the Dulong Jiang originates to the north of Tibet near Chayu County, runs through the NW corner of Yunnan (Gongshan County) before feeding into the Irrawaddy. ...more

Most rivers in Bhutan are sourced on the Bhutanese side of the Himalayas. But there are exceptions. One is the Manas, a river sourced in Tibet. Known as the Lhodrak Sharchu in Tibetan, the river is sourced near Mt. Zholchen, and flows some 380km from Tibet through Bhutan and on into Assam in India, where it joins the mighty Brahmaputra.